This post appeared on my old blog on April 27th, 2005. I was a newlywed housewife in Zurich at the time. Things have changed a lot since then, but the truisms of this post remain. Number 3 is a strange omen for the breakdown in my marriage. Anyway, man, I love me some Carmex. For more old skool fun, here is the picture that accompanied the original post: 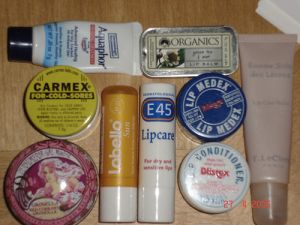 I used to know this person in college. This is the same person married to Jabba the…never mind. Anyway, he decided I was a totally, deeply flawed person and completely out of control. I was messy, I didn’t pay my bills on time, and worst of all, I was addicted to Carmex. This person, in his infinte wisdom, decided one day to HIDE MY STASH. He read somewhere or saw on tv how the feeling of dry lips was provoked by repeated applications of petroleum-based products and that if the person could get off lip balm for a while, the natural moisture balance in his or her lips would be restored.
Yeah. I’m one of those people who has the purse stash, the nightstand stash, the next to the computer stash, and the emergency-in-my-suitcase stash. I also have jars in my makeup bag, but I rarely wear makeup; I also have an emergency jar hidden at my mother-in-law’s house and my best friend who lives near my mother-in-law.
Don’t you hate those men that decide they’re going to be your hero and make you a better woman? I sure do. Actually scratch that. I like heroes, but only when they put their money where their mouth is, and to put it frankly, he had no place telling me how I paid my bills when his mom did all his “accounting”. Men are just jealous of women because we can multitask and they can’t. Anyway…So Butthole decided that he was going to get me off of Carmex. Big mistake. You see, he hadn’t figured out all of my hiding places, like the one behind the bookcase. But that’s not my point. It’s not that he wanted to get me off of Carmex that made me mad, because it was a foolish stupid idea to think I would ever leave Carmex. It’s what is foolish idea stood for–that something utterly inexpensive (Even when I splurge and buy luxury lip balms, my yearly lip balm expenditures are in the 30 dollar range per annum, including my pot-a-month of Carmex, which is less than most people spend on their hobbies like music, books and Starbucks) and, more importantly, SOMETHING THAT MADE ME HAPPY in a rather bleak life with two jobs and full-time school, was something he was going to squash out and change so that he could make me a better person, for my OWN GOOD.
So the “intervention” went down like this: I walk into my apartment and realize that the five or six random pots of carmex on various surfaces are no longer there. Butthole explains that he doesn’t want to catch me smearing that godforsaken substance on my lips anymore. I told him he needed to stop mixing barbituates and pot while we were at kicking addictions, and the throwdown began. After the “truce”, where I realized that he was too stupid to see how stupid he was, and he decided that I was a hopeless cow with a pitiful addiction, I went out for a walk. And the first thing I did was take a hit off the pot of Carmex in my pocket. Sucka.

To my unmarried sisters and brothers, what can we glean from the Carmex intervention episode? Several things, my friends. Listen up.
1. 88 cents a month (based on one pot of carmex per month from Wal Mart) is not going to keep your children from eating. Granted I probably spend two or three dollars a month. However, marijuana, alcohol, obsessive cd/book buying, a penchant for Prada, stock trading and fast cars will all deplete your checking account.
2. You don’t need to “change” people or “fix” people. People aren’t vintage cars or old apartments. People are people. And imagine how you would feel if you had someone nagging you all the time about something that isn’t worth it when you think about life, death and the universe. Flip the situation and ask yourself if you would want to be treated the same.
3. People have hiding places; whether or not we use them is a product of many factors. It could be a hidden email or bank account, a carmex stash, a cafe or bar that nobody knows about, or even a random fantasy or daydream. And if you aggravate us enough about something, we’ll just do it behind your back (obviously un-Islamic but hey), thus assuring a trust and honesty breakdown on both sides.

Also, the Carmex intervention was one of the many contributing factors in my first shahada. Why? Because I decided at that point that it was my life and I was going to do things my way, including religion, which up until that point was a product of pleasing other people besides myself. And I didn’t want someone so petty around that couldn’t handle something that frankly didn’t bother anyone. Don’t let anyone take your Carmex, people. It’s just freekin lip balm. If people are going to get all uptight about that, imagine how they’ll get about other stuff, like fires, miscarriages, floods, unemployment or bankruptcy. Someone tore up over lip balm obviously never said Alhamdoulillah that their life was so easy this was all they had to be upset about.